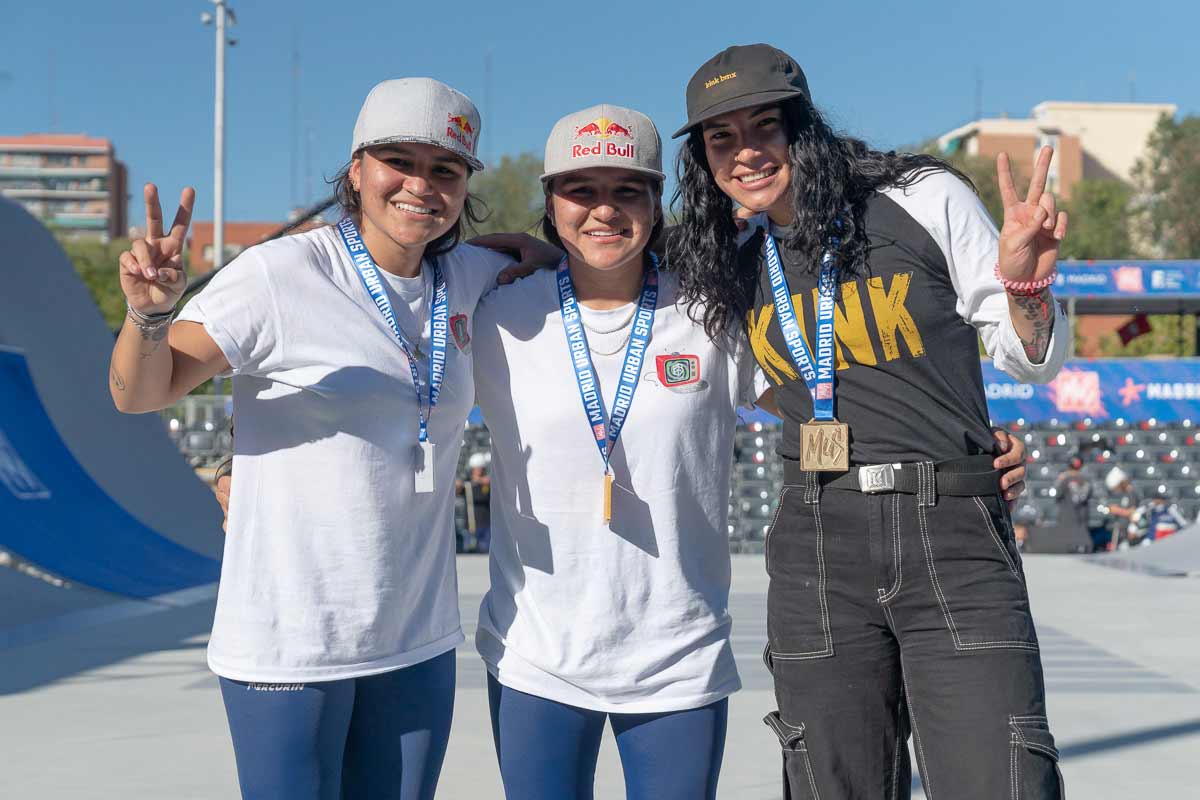 The BMX competition has opened the Madrid Urban Sports with the first medals in the women’s BMX discipline. All the predictions were fulfilled and Lizsurley Villegas, the big favourite, won the final with authority to take the first gold medal of the event.

The Colombian has given no option to her rivals, being the most fluid, without falling and touching the whole park. Tricks like a barspin xUp or a tailwhip on the spine led her to the top of the podium. Lizsurley is on fire after winning the Extreme Barcelona.

On her right, silver medal was her twin sister Queensaray, who stood out with a very clean and beautiful 360 transfer on the spine. Like two identical peas in a podium, the Villegas sisters were completed by Ecuador’s Anahí Molina, who left Spain’s Teresa Fernández-Miranda off the podium.

Despite not standing on the podium in the international category, Teresa Fernández-Miranda won gold at the Spanish Championship. The athlete from Valladolid won with 71.67 points, giving her competitors no chance. Mar Esquer and María Vallejo completed the podium.

The day began with the men’s qualifying session, in which we were able to see the enormous equality that exists between the great favourites for the title, who have been very close.

The Madrid Río-Matadero Park witnessed a small appetizer of the great spectacle that BMX offers. Those present were thrilled by the great international figures present in the capital. And this has only just begun.

Jose “Maligno” Torres led the Qualifier with a score of 83.67 points. The Argentinian delighted us with a giant 360 no-hands to open the round in style. A very clean and perfect round with tricks like a giant 720 in the funbox or a 360 double tailwhip in the spine that earned him the first place.

In second place, with 82.34 points, finished Nick Bruce, who delighted the audience in the Central Park of Madrid Río-Matadero with tricks of many carats. Backflip tailwhip, flair from the quarter to the bank or a very nice 720 were some of his pearls. The American has recovered in time from the chin injury that deprived him of the podium in the Extreme Barcelona to be in Madrid and fight for the gold.

Only one tenth of a second behind Bruce was another of the big favourites, if not the most, Daniel Dhers. The Venezuelan has secured his presence in the semi-finals without risking too much. A ‘normal’ round for Dhers but at the height of very few, leaving us tricks like a 720, followed by no hands in the quarter. Nor did he miss the 360 triple tailwhip in a performance as always very fluid and smooth, touching the whole park. We will see what he has in store for the semi-finals.

Four Spaniards in the semi-finals

The men’s BMX semis will feature up to four Spanish representatives. Daniel Peñafiel, from Burgos, was the best Spanish rider to qualify, taking 11th place with 73.33 points. Arkaitz Armendariz and Jaime Francisco were 14th and 15th, while Pol Díaz also qualified for the semi-finals.