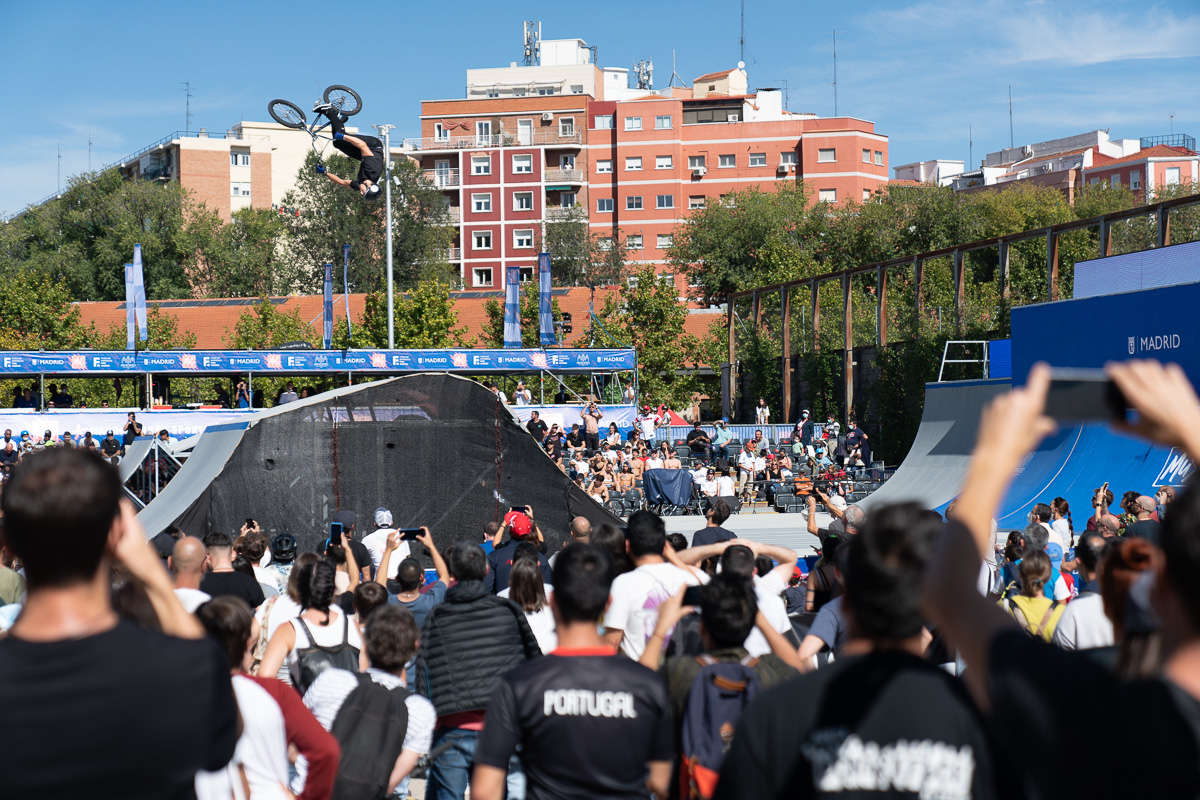 The public invaded the Madrid Río-Matadero park on a brilliant second day of Madrid Urban Sports. The best international athletes in BMX, Roller Freestyle, Scooter and Skateboarding showed off impossible acrobatics in front of thousands of enthusiastic spectators. Urban sports fans but also families and spectators of all ages were able to enjoy a wide range of sports and urban culture throughout the day.

The most acclaimed moment came late in the afternoon with the men’s and women’s street skateboarding finals. Olympian Angelo Caro made it clear why he achieved a great fifth place in Tokyo with an unparalleled display of tricks that brought him the gold medal of Madrid Urban Sports. Sofía Miranda, Madrid City Councillor for Sports, presented the medal to the champion.  After him in the classification, Richard Tury and Mauro Iglesias took silver and bronze, respectively.

Spain’s Valentina Planes slipped into third place on the podium in the women’s final, bouncing back in the second round after a shocking fall that could have knocked her out of contention. The silver medal went to France’s Charlotte Hym, while the gold medal went to Brazil’s Virgina Cavalcante in a well-deserved victory.

In the morning, Central Park was abuzz with excitement and passion, especially during the men’s BMX semi-final where Olympic athlete Nick Bruce dominated, making him the favourite for gold in Sunday’s final. Olympic medallist Daniel Dhers failed to make the top three but a fourth place finish secured him a place in the final.

Another of the areas that attracted the largest number of participants was the Matadero area, where the four courts of the Plaza 3×3 Caixabank were located, offering competitions in this Olympic discipline from eleven o’clock in the morning. The biggest free 3×3 basketball tournament in Spain kicked off with a first day with the mini to junior categories and a total of 185 participants. On Sunday the spectacle continues with the senior category.

The music is in the parks and lifts up the stands

The public has made the stands shake beyond the sporting competitions, as trap and rap music has crept into the parks during the breaks between the competitions, with the imagin Flex Moments, fifteen-minute mini-concerts with the best artists from the local Madrid scene.

The graffiti exhibition also drew applause from the crowds in the area known as Manzanares Town, a space located on the banks of the river that brought together the best urban art artists in the capital.

Thousands of visitors enjoyed Saturday at Madrid Urban Sports, demonstrating the interest and great potential generated by both sport and urban culture. Booming trends that are available to everyone thanks to the great commitment of the Madrid City Council and the Foro de Empresas. On Sunday the festival continues with the international BMX, Scooter and Roller Freestyle finals; the final of the Spanish Breaking circuit as well as more live music and urban art.

If today’s semifinals have already seemed to us of great level, the best is yet to come. This Sunday, from 18:40 to 19:20, the long-awaited final of Scooter Park awaits us with the best selection of athletes ready to show us all their repertoire.